My blog has a new name! (and a short story from the evolution of security and antivirus)

The advantages of having a small blog is that I have a lot of freedom when it comes to changing things around. What used to be a blog about Microsoft Information Protection, will now be a blog about security in general. (But mostly Microsoft 365 stuff). The name, as many of you know, is a little joke about a very common password not so long ago.

And Pa$$w0rd was also the standard password for labs in Microsoft courses. And it is a little funny how security has changed so much the last few years. What was looked at as "okay security" a few years ago, is far from okay today. 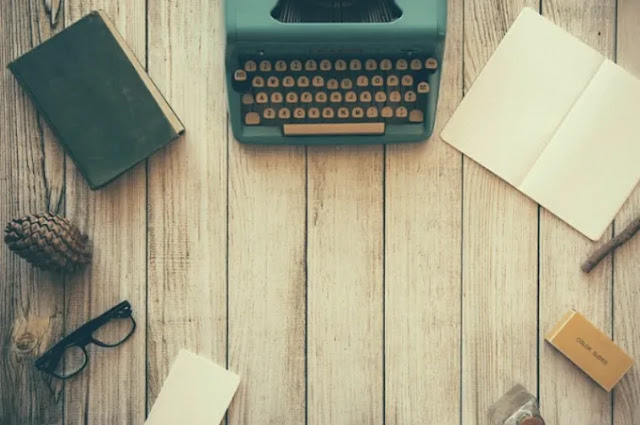 How your office might have looked "a few" years ago. (Photo: Pixaybay.com)

So, I'll start out by saying a little bit about me. As many of you will see right away, English is not my native language and I hope you will forgive me for all typos and spelling errors. I have been working with computers since the 90’s, and for me, working in IT was never a dream. Not because I didn’t want to, it was just that when I grew up the IT business was a tiny field for people with special interests, so the thought never occurred to me. Computers were just a hobby. Something fun. I loved the movie WarGames and thought it would be awesome to know more about hacking, but it was never more than a hobby. One that I wasn’t very good at to be honest. We had some Basic programming on C64 machines in school, and word processing meant WordPerfect, but I was never one of those people who spent their nights on BBS’s or taught themselves programming by themselves. But I ended up being a consultant all the same. I'm also writing stories and I have published two books here in Norway.

Back in the day (when the world was in monochrome).

It pretty much goes without saying that security was not a big deal when I first started using a computer. No username or passwords. So looking back at well over 20 years as a consultant, I see now that I suddenly became something of a dinosaur. Suddenly most of my colleagues are younger people, which feels a little weird, because it sometimes seems like I went from the young rookie to old fart with nothing in between. So, I have decided to embrace the old fart in me and write something about what has happened to get us here.

I’m writing this blog post at a time where we have had quite a few ransomware attacks in the media, and I started thinking of how the world went to pieces when the huge virus attacks ravaged the world back in the day.

Antivirus is something most people take for granted today. If you are using Windows 10, you will have pretty decent protection included in your OS. But as many of you know this has not always been the case. To those of you who was born with a smart phone in the hand it may come as a surprise to learn that the computer was not a common item in homes around the world until the 1990s. And what we could call the great internet revolution did not really come until Windows 95 (the first version of Netscape Navigator came in 94), and before that computers where expensive and mostly used by professionals/companies or those that were particularly interested.

Fun fact: Windows 95 was also the first operating system I installed from CD and not floppy, but unfortunately I have also been through the floppy installation (more than once). Out of sheer curiosity: How many of you have been through the same thing? Sitting patiently at the computer with a pile of 21 (22?) Disks (if you did not get the "High density" disks that made you get away with 13). We learned patience then while hearing the rhythmic gnawing sound as the contents of the diskettes were loaded onto the computer (a patience that came in handy when waiting for a new version of Internet Explorer or Netscape to download over the internet with a 28.8 kbit/s modem).

For those of us who "knew computer stuff", it could be a struggle to visit people. How many of you have gone on family visits and ended up "fixing the computer" for the host? (Eh… Since you are here. I have this problem with … .) Unfortunately, there were also (due to the aforementioned lack of antivirus or missing updates) in most computers some quite time-consuming cleanup jobs. At everything from parties to random visits, I ended up in the "computer room" where I removed viruses and other crapware for people (free, gratis and with no charge). But I think this has changed in the past couple of years, since the introduction of Windows 10, especially.

Although virus infections were not unknown, it was perhaps not until 1999 that people seemed to understand how bad things could go. March 26, 1999 is the day when the Melissa virus began to wreak havoc around the world. Melissa infected more than 100,000 machines worldwide and David L. Smith was sentenced to 10 years in prison for being behind the virus. You would think these punishments deterred people, but it would turn out to be far from the worst virus attack we would experience. 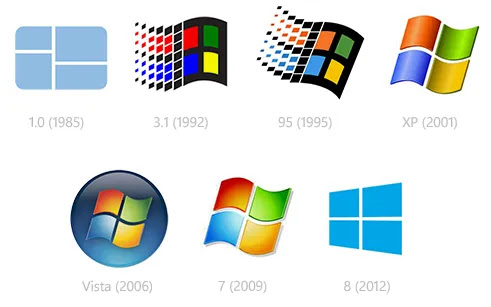 Different Windows logos for those who want to feel a little nostalgic. (Photo: msdn)

I’m not saying that there was no antivirus at that time. A relatively well-known company like Norton made their first antivirus for DOS in 1989 and they were certainly not the first. It was not unknown to people either, but they cost money. Like I said, If you are on Windows 10 now, you have integrated antivirus and are already more secure than you would be then.

Most people who work with IT today are familiar with ransomware virus and how way they encrypt data and ask for "ransom" to decrypt them again, but we have had many dangerous viruses over the years. The ILOVEYOU virus is a good example. Known as one of the most catastrophic viruses ever, the ILOVEYOU virus infected over 50 million machines in 10 days during May 2000, causing a loss of around $ 10-15 billion across 20 countries. Masked as "LOVE-LETTER-FOR-YOU.txt.vbs" (Windows hid the .vbs extension for most people so that it looked like a standard txt file) it seemed harmless enough, but opening the attachment activated the Visual Basic script. This worm overwrote random file types (including Office files, image files, and audio files), and eventually sent a copy of itself to all the addresses in the Windows Address Book used by Microsoft Outlook. This spread much faster than any other previous e-mail worms. 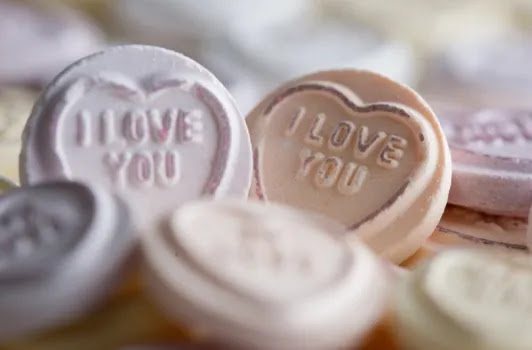 Not all love is as sweet as this. (Photo: Pixabay.com)

Four years later came what is believed to be the most expensive virus attack in history (so far). MyDoom, also called W32.MyDoom@mm and lots of other things is said to have cost 35 billion dollars, and at its worst it is said that in a few hours the internet speed in the world was 10% lower and the average load time of Websites became 50% slower just because of this virus.

It's been a long time since Melissa, ILOVEYOU and MyDoom ravaged now, but new and exciting viruses have taken over. At a time when hacker attacks, crypto / ransomware threats and foreign powers' attempts at cybercrime are in the media all the time, the need for proper security is growing faster than anyone could imagine a few years ago.

For us as users, it may not be the worst thing that can happen (although it may feel like it). You often do not have the most critical/sensitive data and probably just end up reinstalling the PC. Hopefully you have saved copies of your family photos etc. on external storage, OneDrive or DropBox. For a company, on the other hand, things are different. I have been hired by customers who are so heavily infected that we have had to reinstall EVERYTHING and of course: It is considerably easier with a PC than heaps of servers full of data and databases. And it costs A LOT. And even so, it is the price of security solutions we often end up discussing with customers and I always say the same thing: It is not the price itself that determines whether you have good security or not, but I still think there are many other places it would be wiser to save money.

For those of you who want to know more about what security mechanisms we can use in Microsoft 365, I hope you will find something useful in my blog. I will add content as often as I can, but cannot promise super regular posts. All that remains is to wish you all a good and virus-free day.

Popular posts from this blog

This post describes some of the issues I have had/seen with the AIP Client and Office. Usually everything works well, and you can just start using the labels, but when things go wrong, it is not alway easy to see why.
Read more 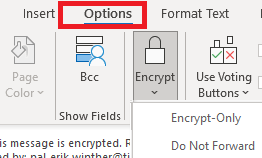 Do not Forward and Encrypt Only can be found in Outlook by default for all who uses Office 365 E3 or equivalent/higher. And as many know, they can also be used in a Sensitivity label. But what are the consequenses of using these, instead of creating our own encryption settings within the label? This is what we will be looking at today.  As many know, we can use these two in Outlook, as long as we have the proper license. They are well hidden away under Options, and can look a little like this:    EO and DNF in Outlook.  I've covered these in earlier blogposts , but lets just quickly go through them again here: " Encrypt/Encrypt-Only " option makes sure the email is encrypted and recipients must be authenticated, but then they have all usage rights except Save As, Export and Full Control (Basically means no restriction except that they cannot remove the protection). When the Do Not Forward option is applied to an email, the email is encrypted and recipients must be au
Read more

Requirements to use Information Protection (AIP, MIP, RMS) in your organization 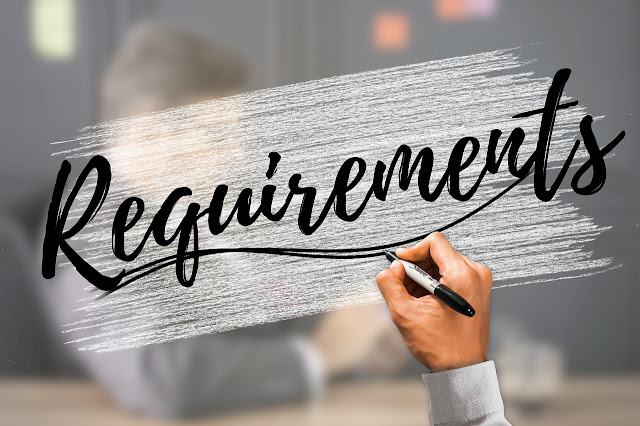 Sometimes, when you work with something over time, and then want to explain some of the functionality to others, it is easy to jump some steps. I have gotten some feedback from readers that has made me realize that there are a few things that should be added to many of my posts.
Read more

Pål-Erik Winther
I started this blog to try to gather and simplify some of the information around Microsoft 365 for myself, but maybe others will find something useful here as well. Everything here is based on my own thoughts, and does not in any way represent my employer. Since English is not my native language I hope you will excuse any incorrect grammar etc.